Well, inside Kayaks in the Regents Canal, to be exact. Under an overcast sky we pulled on life-vests, grappled with paddles, carried the bulky kayaks to the water’s edge two-by-two.  Then we tentatively climbed on board and cast off.

Almost immediately Sam and Natalie Hunter decided it was time for a race, and took off up the canal. In the wake of their frenzied competition, Jess, Natalie Satchel, and Johann were nearly taken out by Melanie’s unpredictable moves. Meanwhile Jules, Nick, Lisa, Rebecca and Michelle were the sensible kayak-party-people, following calmly and actually enjoying the scenery.

And the scenery was great. In an hour and a half, we took in Regents Park, London Zoo, a floating Chinese restaurant, a scary bat cave, and the Camden lock market where tourists took pictures of us floundering about in the water.

By the time we pulled up to the shore, there was a sense of calm in even the most rowdy kayakers. We all agreed: London seems much more serene when you’re drifting along in a kayak. We also all agreed that Michelle had the most natural finesse, Jules had the best outfit, and Jess was somehow a magnet for leaves and canal slime. 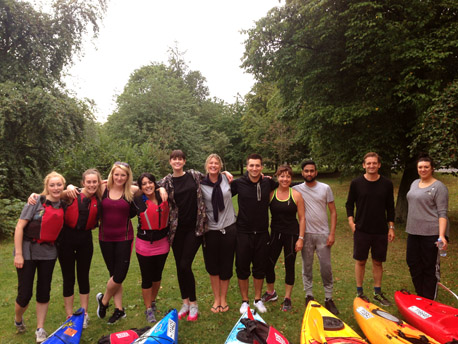